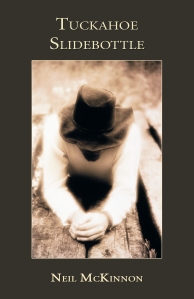 Tuckahoe is actually a fungus that grows below ground in wooded areas. It’s supposed to be related to the truffle. However, it tastes nothing like a truffle. I know, because we used to find it when we were kids and boil the hell out of it trying to make it digestible. We thought it was preserved pemmican. Even our teachers thought it was pemmican. Some of us had our teeth worn away by the time we left grade school. Slidebottle is the last name of one of the not-so-nice characters in the book. Thistledown’s marketing folks said that hopefully the title would get people curious enough to pick it off the shelf at the book store.

The stories all take place in a fictitious small Saskatchewan town called Tuckahoe. It’s situated between plains and parkland. I called the town Tuckahoe because a lot of the stories take place beneath the surface — they’re the ones that cause folks to whisper when they gossip. A few people have seen similarities between Tuckahoe and my home town but there are also many features in both places that do not resemble one another. Actually, what is true of the town is true of the people. The most common question I get is, “Are my characters based on real people?” The answer is no and yes. No character in the book is a portrait of any real person, living or dead. However, no character is a complete creation. So, while no one will be able to recognise him or herself, everyone should have a little something in common with each of the characters – which, I believe, is the way of fiction. BUY TUCKAHOE SLIDEBOTTLE

WHAT ARE THE STORIES ABOUT?

Some of you have asked what the stories are about. The following is a brief description of some of them: